The Opioid Crisis: A Serious Societal and Business Issue

More and more U.S. citizens are dying from opioid overdoses. In 2017, the president declared it a public health emergency. If we, as a society, can’t find a way to meet this challenge, there will be an even sharper increase in opioid addiction over the next decade.

But while the opioid problem has turned into a full-fledged crisis, the price of heroin has dropped. Fentanyl, which is 50 times more potent than heroin, has become an outpatient option. Pharmaceutical manufacturers have aggressively marketed opioids. And doctors still prescribe it to reduce and eliminate pain.

What exactly are opioids?

“Opioids” doesn’t refer to a single drug. They are highly addictive narcotics that are very effective at blocking pain receptors in the nervous system. This class of drug includes OxyContin, Oxycodone, Vicodin, Percocet, Codeine, Fentanyl, Methadone, and Heroin.

As far back as 2013, 249 million prescriptions for opioid pain medications were written by healthcare providers. That’s enough for every American adult to have their own bottle of opioid pills. And, even with efforts to curb the now over-prescribing of opioids, those numbers have continued to increase.

Why are they prescribed?

Opioid addiction often begins as a treatment for a medical condition, usually the management of intense pain. But there are also other contributors to the opioid crisis, including dentists who are prescribing them for younger patients; patients who are on other prescriptions but feel the need for stronger medications – so they raid other people’s medicine cabinets or worse; and young adults are often under peer pressure to use the drugs because they help you “feel good.” 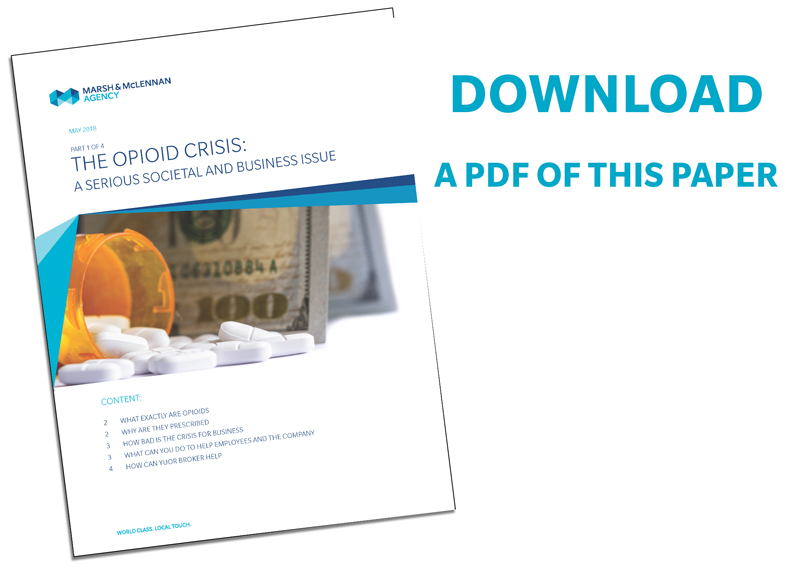 How bad is the crisis?

As a nation, we are dying younger. Our average life expectancy in 2018 is now down for the second straight year — something not seen in more than half a century. Researchers point to the opioid epidemic, which is cutting down young adults at alarming and increasing rates, as a fundamental reason. The leading cause of accidental death due to opioid use is addiction to these drugs.

Every day, more than 115 people in the United States die after overdosing on opioids, according to U.S. government statistics. The Centers for Disease Control and Prevention estimates that the total "economic burden" of prescription opioid misuse alone in the United States is $78.5 billion a year, including the costs of healthcare, lost productivity, addiction treatment, and criminal justice involvement.

How bad is the crisis for business?

A significant part of the economic problem is due to lost productivity in the workplace. That makes sense, seeing as how 7 out of every 10 employers have felt the effects of opioid drug misuse. Government statistics indicate that problems directly related to opioid abuse include:

You, as an employer, are also paying for at least 1/3 of the opioid prescriptions that wind up being abused. And you’re paying an average of more than $19,000 per year per employee for issues related to opioid dependency. Opioid abuse has a significant effect on workers’ compensation, and it looks like that will only get worse if no substantial actions are taken.

What kind of industries have more abuse issues? According to research done by the National Safety Council, the construction and mining industries experience higher than average opioid disorder levels, while agriculture, finance, insurance, and real estate were among the lowest.

What can you do to help employees as well as your company?

There is no simple “cure” for the opioid addiction crisis, but there are actions you can take to help make it less of a problem.

According to results from a National Safety Council survey, 81 percent of companies that responded had drug policies that lacked “at least one critical element of an effective drug-free workplace program.” Most companies simply aren’t yet equipped to handle the results of opioid abuse.

But the problem is having a profound effect on the workplace and it needs to be addressed.

Find out how Marsh & McLennan Agency can help.

If you have specific questions about dealing with the opioid crisis, creating effective plans to handle it, or if you’d like more information about how MMA risk management or claims services can help, contact your local Marsh & McLennan Agency representative.

This series on “The Opioid Crisis” will include future posts regarding: